3. Appreciation of Truth by Meditation

〇 is the famous Enso symbol, which you will see widely-used by Japanese Zen Buddhists.

In a twist, I am starting to see Enso used more and more by Chinese Buddhists.

Here is the typical appearance of Enso artwork by Japanese calligrapher Kougetsu.

Enso is not a Japanese Kanji character. It falls more into the category of a symbol. There is some debate, but many consider Enso to be a religious symbol.

Some call this "The Circle of Enlightenment". Others call it the "Infinity Circle". If you actually took the meanings of the two Kanji (円相) that make up the word "En-so", you could read it as "Mutual Circle" or "Circle of Togetherness". I think the Enso symbol can simply mean different things to different people. Therefore, you should let it have the meaning that you perceive.

The appearance of your Enso will be determined by the artist's personal style, feeling, mood, etc.

First let's correct something: The Japanese romanization for this character, "Zen" has penetrated the English language. In English, it's almost always incorrectly used for phrases like "That's so zen". Nobody says "That's so meditation" - right? As the title of a sect, this would be like saying, "That's soooo Baptist!"

禪 by itself just means "meditation". In that context, it should not be confined to use by any one religion or sect.

Regardless of the dictionary definition, more often than not, this character is associated with Buddhism. And here is one of the main reasons:
Zen is used as the title of a branch of Mahayana Buddhism which strongly emphasizes the practice of meditation.
However, it should be noted that Buddhism came from India, and "Chan Buddhism" evolved and developed in medieval China. The Chinese character "Chan" was eventually pronounced as "Zen" in Japanese. Chan Buddhists in China have a lot in common with Zen Buddhists in Japan.

More about the history of Zen Buddhism here.

Please also note that the Japanese Kanji character for Zen has evolved a little in Japan, and the two boxes (kou) that you see at the top of the right side of the character have been replaced by three dots with tails.

The original character would still be generally understood and recognized in Japanese (it's considered an ancient version in Japan) but if you want the specifically modern Japanese version, please click on the zen Kanji to the right. Technically, there is no difference in Tensho and Reisho versions of Zen since they are ancient character styles that existed long before Japan had a written language.

There is also an alternate/shorthand/simplified Chinese version which has two dots or tails above the right-side radical. This version is also popular for calligraphy in China. If you want this version, just click the character to the right.

Appreciation of Truth by Meditation

心印 is a Buddhist concept that simply stated is "appreciation of truth by meditation".

It's a deep subject, but my understanding is that you can find truth through meditation, and once you've found the truth, you can learn to appreciate it more through further meditation. This title is not commonly used outside of the Buddhist community (your Asian friends may or may not understand it). The literal translation would be something like "the mind seal", I've seen this term translated this way from Japanese Buddhist poetry. But apparently, the seal that is stamped deep in your mind is the truth. You just have to meditate to find it.

Soothill defines it this way: Mental impression, intuitive certainty; the mind is the Buddha-mind in all, which can seal or assure the truth; the term indicates the intuitive method of the Chan (Zen) school, which was independent of the spoken or written word.

This means, "One is all, all is one", in Japanese.

This is a somewhat well-known modern proverb in Japanese. However, many will associate it with an episode of Fullmetal Alchemist, a popular Japanese anime series.

This Japanese phrase is often translated as "train both body and spirit".

Here's the breakdown of the words in this phrase:
拳 means fist.
禅 is zen, which means meditation.
一如 is a word that means "to be just like", "oneness", "true nature", or "true character".

I have to say, this is not how I would translate this. To me, it's really about training with your mind and remembering that mediation is a huge part of training, not just your fist. As the Shaolin Buddhist monks show us, meditation is just as important as physical training in martial arts.

This encompasses the idea of meditation.

It's also a term used to describe a deep form of day-dreaming, exploring one's imagination, the act of contemplating, or the idea of contemplation. 冥想 is often associated with Buddhism, however, the word "Zen" in Japanese (or "Chan" in Chinese) is probably more commonly used (or better known in the west).

禪宗 is one way to title "Zen Buddhism". Because the original pronunciation of Zen in Chinese is Chan, you'll also see this expressed as Chan Buddhism.

From the Buddhist Dictionary:
The Chan, meditative or intuitional, sect usually said to have been established in China by Bodhidharma, the twenty-eighth patriarch, who brought the tradition of the Buddha-mind from India. This sect, believing in direct enlightenment, disregarded ritual and sūtras and depended upon the inner light and personal influence for the propagation of its tenets, founding itself on the esoteric tradition supposed to have been imparted to Kāśyapa by the Buddha, who indicated his meaning by plucking a flower without further explanation. Kāśyapa smiled in apprehension and is supposed to have passed on this mystic method to the patriarchs. The successor of Bodhidharma was 慧可 Huike, and he was succeeded by 僧璨 Sengcan; 道信 Daoxin; 弘忍 Hongren; 慧能 Huineng, and 神秀 Shenxiu, the sect dividing under the two latter into the southern and northern schools: the southern school became prominent, producing 南嶽 Nanyue and 靑原 Qingyuan, the former succeeded by 馬祖 Mazu, the latter by 石頭 Shitou. From Mazu's school arose the five later schools.

This title can be defined as Zen contemplation in Japanese, or sit quietly in (Buddhist) meditation in Chinese. It also carries a similar meaning in Korean Hanja. Therefore, this is a rather universal term for meditation in the context of Buddhism throughout the Orient.

Can also be translated as "Meditatively equipoised" or "enter into meditation by stilling the karmic activities of deed, speech, and thought".

The first character happens to be known as Zen in the west (pronunciation coming from Japanese) but this title is not often used in Japan (won't be recognized as a Japanese title).

In fact, the title "Zen Garden" is basically made up by westerners.

This title speaks of reaching an understanding (of Zen or the world). It also means "to practice meditation". The two concepts lead you to the idea that meditation leads to understanding. 參禪 is pretty deep, so you can do your own research, or decide what this means for you.

This can also be defined in a more complex way as "thoroughly penetrating with meditative insight".

This title is used in certain contexts but is not widely-known by the general population of China or Japan.

From Japanese, you will see this title romanized as "zendo", which is the brand name of a board game, and also a title used by some martial arts studios and karate dojos. Oddly, many translate this as "zen fist" although there is no "fist" in the title. If you literally translated this title, it would be "meditation way" or "meditation method".

In Chinese, this would be "chan dao" with the same literal meaning as the Japanese title. It's used in China by just a handful of martial arts styles/studios.

You should only order this title if you really understand the meaning, and it has some personal connection to you (such as practicing a martial art style that uses this title, or if you love the board game Zendo). Many who see your wall scroll will not be familiar with this title, and you'll have some explaining to do.

The first character can also be written in a more complex traditional way as shown to the right. Let us know in the special instructions for your calligraphy project if you want this style.

If you order this from the Japanese master calligrapher, the first character will automatically be written with an extra dot on top. This is the variant form of the original Chinese character which is commonly used in modern Japan Kanji. See sample to the right.

All items below are sold, however, similar items may become available in the future.
Feel free to contact me at Help@OrientalOutpost.com to see if or when more of what you are looking for will be available. 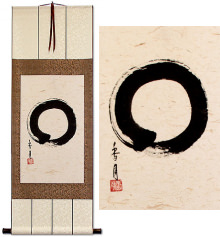 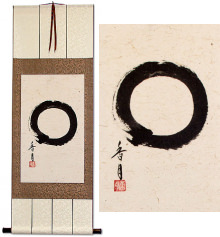 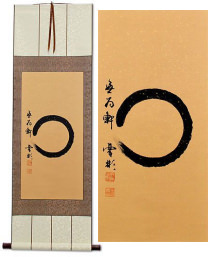 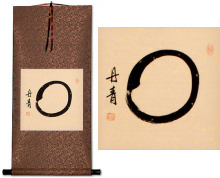