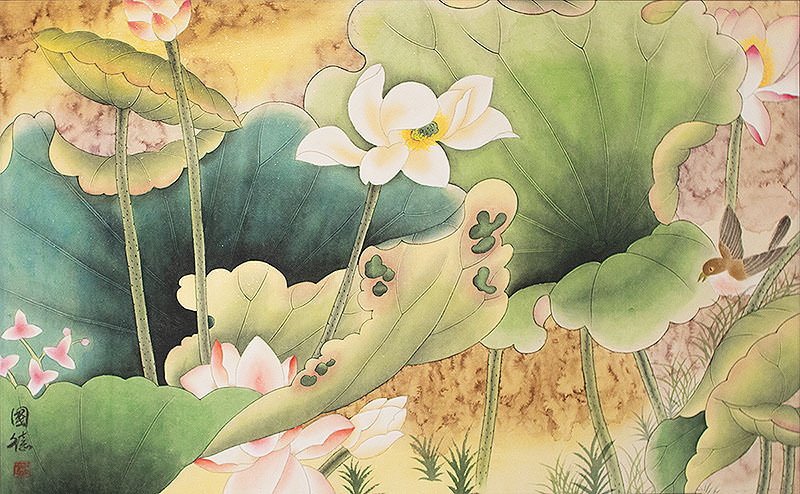 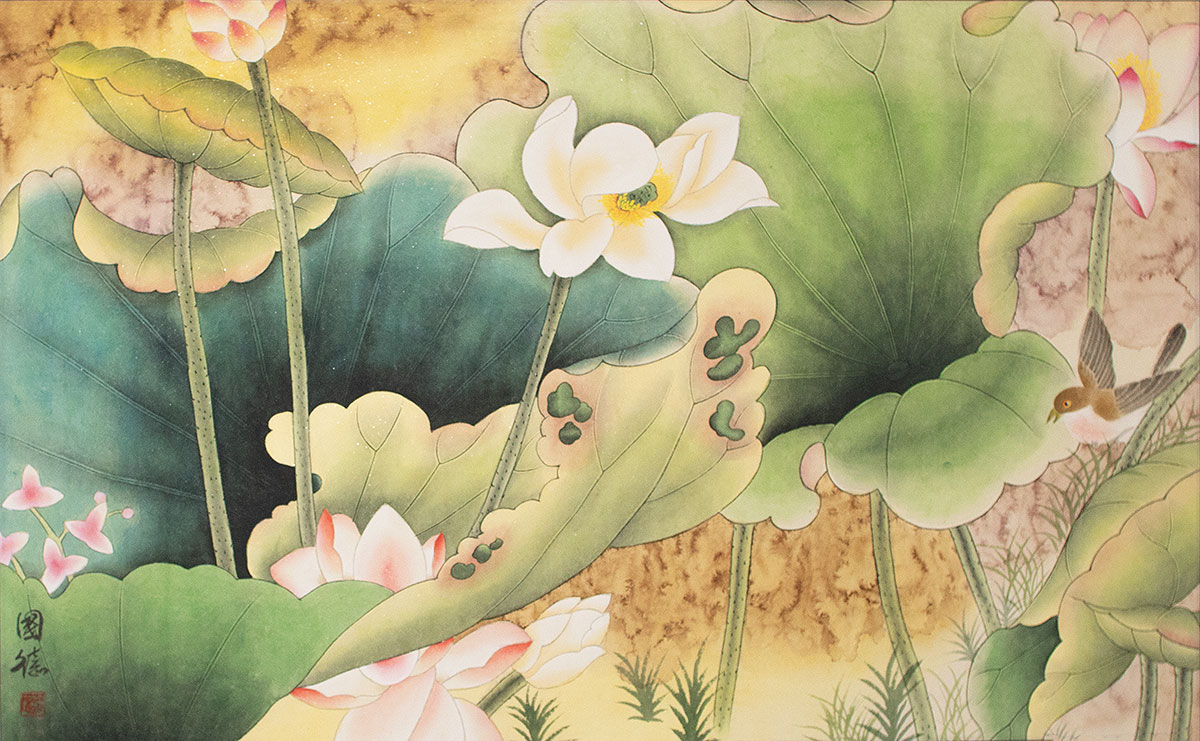 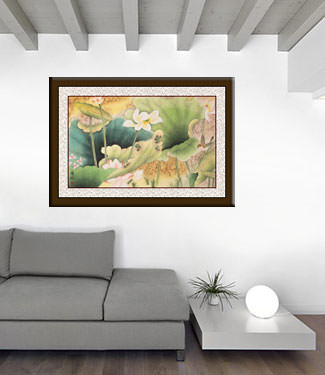 After you frame it, this bird artwork will look great in your home or office.

A silk brocade border is included, as shown. This border will save you a lot of money if you use that traditional border instead of matting when you have this framed.

See Larger Image of this Painting

Information about how this Asian painting is mounted

Little Bird in the Lotus

Originally, a customer asked for a couple paintings like this on a custom order. I liked them so much that I asked the artist for a few more in this style.

This artist has a knack for making even the wilting leaf of this lotus look beautiful. Of course, if you know the story of this artist's life, you know he is an expert in turning the lemons of life into lemonade.

This was painted using watercolors on xuan paper (rice paper). It has been mounted with a shiny silk border making it ready-to-frame.

About the amazing artist behind this great artwork:

If you have navigated much of our website, you already know this is a great all-around artist that does wonderful work in many categories. But of course, there is a story...

I was supposed to be on vacation, and I just wanted to see the karst mountain landscapes of the Li River near Guilin. As luck would have it, I stumbled across a very inspiring artist.

In fact, this man is probably the most courageous person that I have ever met. He certainly has my respect and admiration.

As I watch him finish one of his paintings, I find myself in awe of this man that can do amazing things with only one arm that most people can't do with two.

While he is a wonderful and talented artist, that is only part of his story

His full name is Ou-Yang Guo-De. He and his sister now live in Guilin. He keeps himself busy painting, while his sister sells his art at a small gallery not far from the center of the city.

When they were very young, their mother died. Their father didn't make much money, and with their mother gone, he had to remarry quickly for financial reasons (very common in Chinese culture under those circumstances and that time in history). Their father found a new wife in a village, and they all moved into the woman's family home.

Part of young Ou-Yang Guo-De's chores included collecting corn cobs that fell from the passing train cars at nearby railroad tracks. The corncobs are burned and used as fuel for cooking, and even heating homes in poorer villages where people cannot afford coal.

One day, when he was about 11 years old, Ou-Yang Guo-De came upon a train that had stopped on the tracks. Under the train he saw a bounty of corncobs. He climbed under the train to get the precious cobs when tragedy stuck. The train began to move, and literally cut him in half...

Every time I put my glass down, Mr. Ou-Yang would say, "Cheers!", and quickly our glasses go "bottoms up" again. Between drinks we eat from a steaming hot pot full of chicken, cabbage, and other vegetables.

The details he told me about this event were so vivid that they are a bit too graphic for a happy art listing. He still remembers everything that happened until he lost consciousness, expecting to die.

Though pieces of his story are missing from when he was unconscious, there must have been a miracle involved because somehow he survived. The nearest hospital was far away, and while he has no idea how he got there before bleeding to death, that's were he woke up. But both of his legs and his left arm were gone forever.

In China, the most likely occupation for a disabled person like him would be to become a beggar on the street, but not Ou-Yang Guo-De!

He continued to study and go to school, and went to work at an umbrella and parasol factory. He showed a lot of natural artistic talent, so the factory owner sent young Mr. Ou-Yang to art school for two years. After graduation, he went to work hand painting beautiful scenes on rice paper and silk parasols.

All of the cheers took their toll, if my flushed red face doesn't tell the story, the fact that I am singing a Neil Diamond song should tell you something.

After many years at the factory, working for low wages, he decided to make a change. He took a leap of faith and went out on his own as an artist. It was a little rough at first, but it turned out to be a good decision.

He has done well, and has quite a following. Also, he is a little famous for more than his art. You see, a few years ago, he was given an award by the government of China for being an example of what disabled people should aspire to.

But there is something about him that is different. This guy totally loves life. He is truly happy and good-natured. He laughs and tells jokes and is the life of the party. He is not a social outcast, but rather a social phenomenon. He is surrounded by a lot of friends because I think his friends feed off of his enthusiasm for life - I certainly felt it myself.

I spent several days with the artist, and I may be forever changed. Whenever I think I am in a tough spot, or difficult circumstance, all I have to do is think about Mr. Ou-Yang. If he can overcome what he did, then I can overcome my petty problems.

All orders billed in U.S. Dollars.